FC Barcelona organized the talk Crossing Bridges, about the convergence of Art and Sport by overcoming the existing prejudices between both worlds. 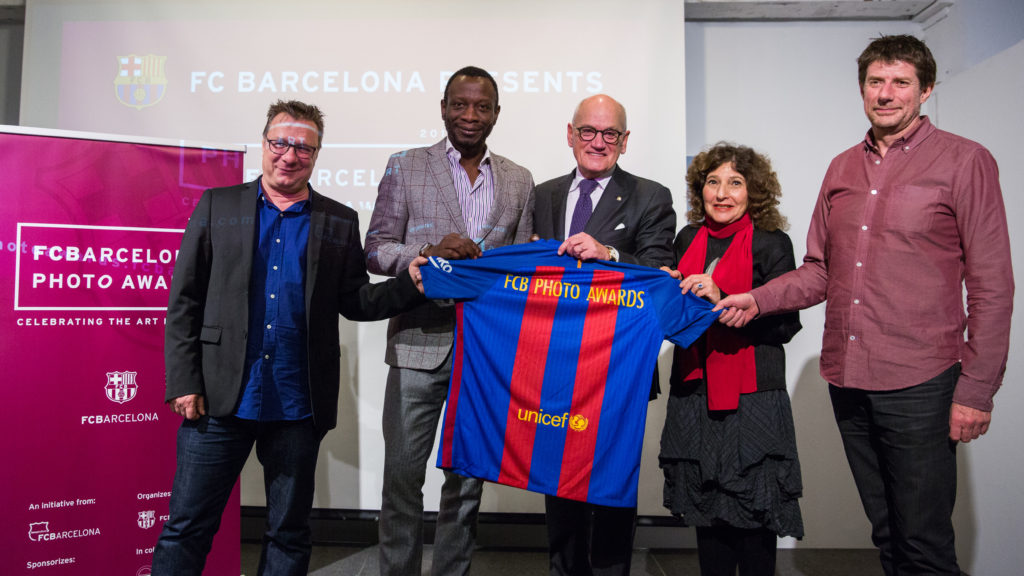 Aperture Foundation – The Vice Chairman of Barça, Carles Vilarrubí, expressed his gratitude to the attending speakers

New York, 28th of November.– FC Barcelona has organized a talk named Crossing Bridges, hosted by Aperture Foundation in New York. This talk was part of the promotional activities of the FCBARCELONA PHOTO AWARDS, which is the first one in its nature, initiated by a sports club and aiming at photographs that will best depict the positive values of sports for the society.

The Awards expect participation of artists who use photography as a vehicle for artistic expression, professional photographers, as well as photojournalists. Rather than professional sports photography, The Jury will prioritize the submissions that show sports as it is practiced in daily life everywhere in the world.

The concept Crossing Bridges was incepted from the comprehension of the current boundaries that separate the artistic and sports sectors. Thanks to this realization, the FCBARCELONA PHOTO AWARDS are expected to recover traditions and unite the worlds of Arts and Sports, as they used to be throughout the history.

While it was the first talk bearing this title, it was meant to be the start of a movement that aims to bring positive changes in the worlds of Arts and Sports. Hence, being part of the promotional activities of the FCBARCELONA PHOTO AWARDS, this event turned to become a pivotal discussion, that will set future trends and give more weight to the convergence of both worlds.

Through the concept Crossing Bridges FC Barcelona is aiming to create a platform where both worlds can interact, communicate and start collaborating for possible future synergies.

To give life to the concept, specialists of both sides were brought together, with the aim of finding out how to build bridges, breakdown barriers and overcome the prejudices that nowadays separate the worlds of Art and Sports. 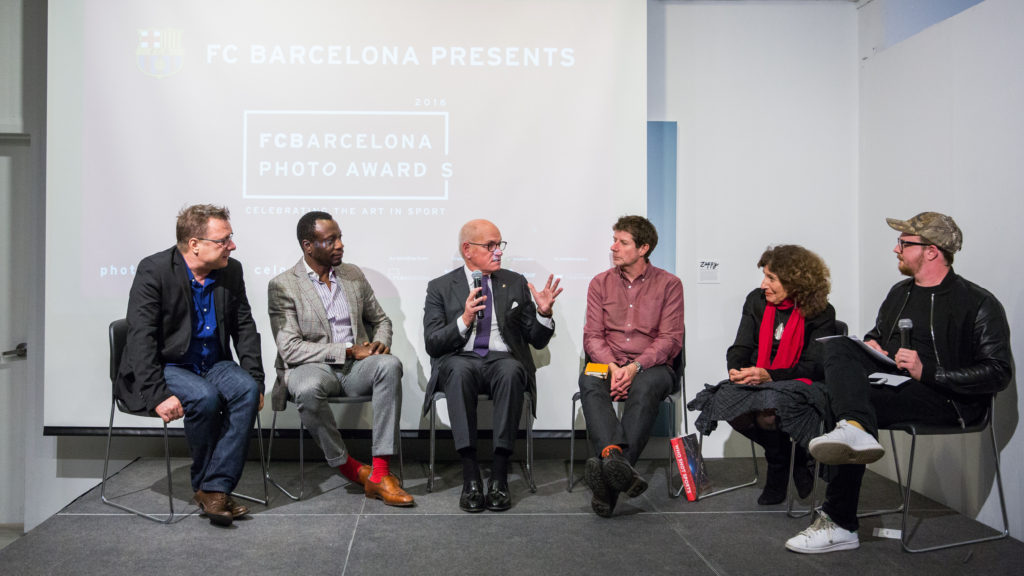 The discussion was held between:

Carles Vilarrubí, the Vice Chairman of the International and Institutional Relations Area of FC Barcelona,

Azu Nwagbogu, the founder and director of the African Artists’ Foundation, a non-profit organization based in Lagos (Nigeria), established in 2007, and dedicated to the promotion and development of contemporary African arts and artists,

Stephen Mayes, who has worked at the top levels of photography for more than 25 years, in the areas of journalism, art, commercial and fashion, and is the Executive Director of the Tim Hetherington Trust,

Gail Buckland, author, educator, curator and authority on photography, served as a photographic consultant to former Vice-President Al Gore on his PowerPoint presentation, documentary and book An Inconvenient Truth. Currently Ms. Buckland is exhibiting Who Shot Sports at the Brooklyn Museum, highlighting sport photographers and their place in the history of photography,

Jean-Denis Walter, who has worked for L’Equipe group for 15 years, being Head of Photography and Editor-in-Chief at L’Equipe Magazine, one of the most prestigious sports magazines of France. Mr. Walter opened his own Gallery a year ago, becoming the only gallery in Paris specialized in sports photography.

Artist and writer Chris Wiley, who writes about photography for the New Yorker and is a contributing editor of Frieze Magazine, moderated the talk.

Wiley took an interest in the fact that a sport club like the FC Barcelona was the catalyst of a photography competition as ambitious as the FCBARCELONA PHOTO AWARDS.

All the attendees were very satisfied with the initiative, especially since photojournalism is going through a serious crisis at the moment. Despite that, Stephen Mayes pointed out that it is a great time for the photography world, thanks to the technological advances, that can do things that seemed impossible for the majority of us.

For her part, Gail Buckland, responsible for the Who Shot Sports exhibition in the Brooklyn Museum, remembers that, not long ago, sport photography was considered by the majority of professionals in the sector as ‘second division’. The same occurred in the past with fashion photographers and those who followed Rock artists, but this general perception changed a few years ago and she hopes that the same evolution will happen to sport photographers.

Jean-Denis Walter, remembered that during his professional life he saw many sport photographs that are authentic works of art, thanks to the authenticity that the photographers were able to capture in different sports.

Azu Nwagbogu, showed what selection criteria will apply to the photographs and projects received until 30 December: the authenticity of each moment and the fact of conveying the values of sports through the photographs. He added that the images presented don’t have to necessarily revolve around the sport practice; they will be evaluated by the story about the values linked with sports.

The Vice Chairman Carles Vilarrubi expressed his appreciation for the interest shown in the awards, and was very pleased with the number and quality of the people attending the Talk. He also emphasized that the organization of an artistic photographic and photojournalistic competition at international level meets the objective of supporting the photography sector, by promoting artistic activity in this sphere from a platform of such diffusion as Barça. 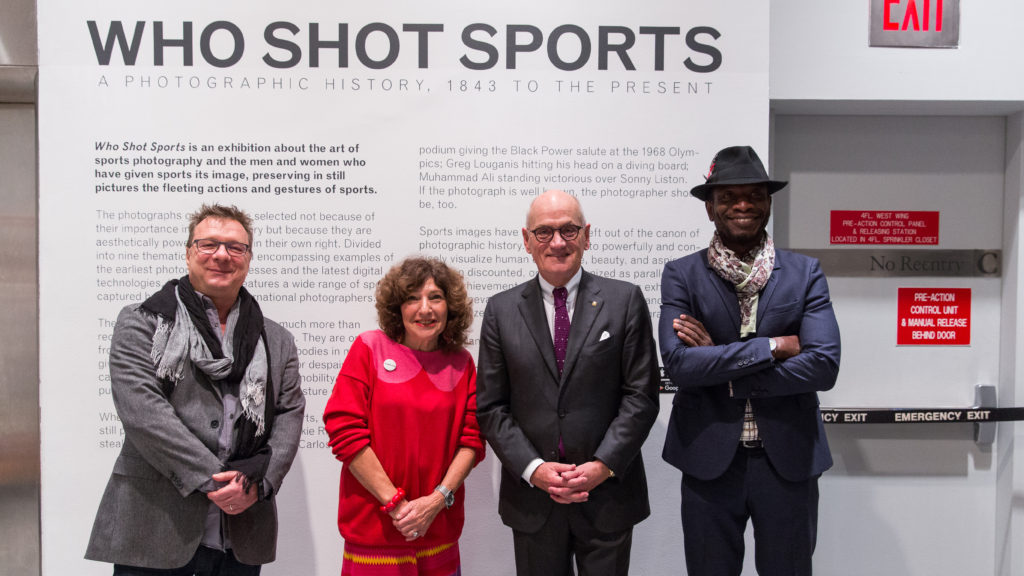 As part of the presentation events, on November 29th, Gail Buckland gave the panelists of the Talk a private visit to her exhibition Who Shot Sports at the Brooklyn Museum.